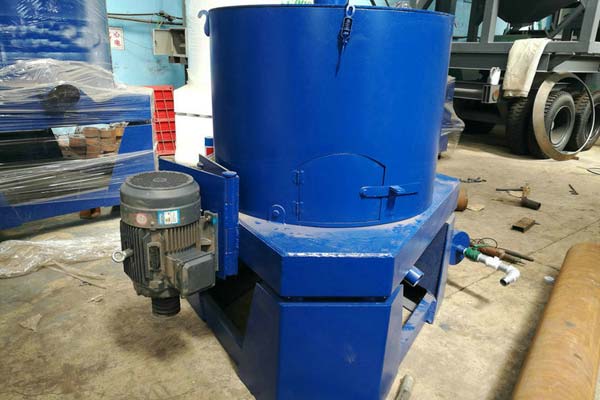 Gold centrifugal concentrator specifications:
Gold centrifugal concentrator is a fairly new kind of gravity concentration apparatus. It is a machine that uses the principles of a centrifuge to boost the gravitational force which is experienced by feed particles so as to enable separation on the basis of particle density.
A concentrate bowl that has a cone shape, which rotates at a high speed and powered by an electric motor with a pressurized jacket that encompasses the bowl are the key components of this unit.
Near the centre of the bowl from above, feed material that comes from the cyclone underflow or the ball mill discharge is fed as slurry towards it. The slurry that is fed contacts the vessel’s base plate and as a result of the rotation, it is thrust outward. The concentrate bowl has some outer extremities which houses a series of ribs which has a groove between each pair of the ribs.
The lighter material rises upwards over the grooves during operation and the heavy mineral particle (that usually has economic value) is trapped in them. Along the perimeter of each groove, pressurized water is injected through a series of tangential water inlets so as to maintain a fluidized bed of particles to allow heavy mineral particles to be efficiently concentrated in it.